skip to main | skip to sidebar

So I make pretty good food I must admit. My husband has not once barfed, not eaten, or ordered pizza.


Anyway, Shawn and Shannon came over for game night on Tuesday. No, its not the kind of game night where you gather around with couples, Tuesday night game nights are HALO nights. The guys all play on Xbox live together, for about 3 hours, or sometimes until they get sleepy. So anyway, Shawn and Shannon came over and I made my FAVORITE dish Poppy Seed Chicken. Then after dinner my loving husband told them what I accidentally did. I bought a turkey instead of chicken (the ones that are already cooked) so we had like Turkey/Chicken Poppy Seed. No one could tell which makes you think you are a good cook right? haha. I do have to describe my dessert because its one of my favorite, however it is fattening, but what dessert isn't..I mean c'mon the ones that taste REALLY good.

I took Buttermilk waffle crackers and spread nutella on them. Then I took ice cream and cut the box and too the ice cream out so its like a role of ice cream. Then I cut it to make ice cream sandwiches. Put it in the freezer and BAM! You have a cheap no mess ice cream sandwich that has like fudge (nutella) which makes it so YUMMY! I would dare anyone to try these. They are so simple, yummy, and great for guests! 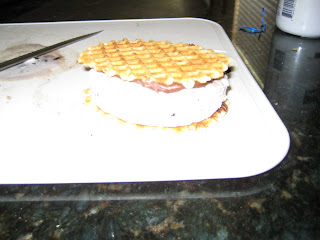 Posted by Scott and Christie at 2:06 PM

Holy cow, that is such a good idea! I am definitely going to try that. 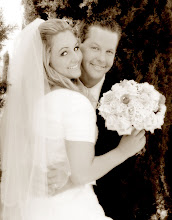 Out of all the fish in the sea you and me were meant to be!

Scott and Christie
Scott and I met in December of 05. I asked him if he wanted to hang out and ever since then we have been inseparable. We were married on March 29, 2008 in the Newport Beach Temple. We are loving married life and are really excited about our new family=)